The Roman Hinterland Database Project combines intensive survey data collected over the past 70 years in the territory of Rome to create the largest integrated regional dataset for the hinterland of any ancient Mediterranean city.

The project brings together the British School at Rome’s Tiber Valley Project (the restudy of J.B. Ward-Perkins’ groundbreaking South Etruria Survey), La Sapienza University’s study of the Suburbium immediately northeast of the city of Rome, and Groningen University’s work in the Pontine Region to the south.

Over the past five years, we have successfully combined these separate datasets into a single database. Thousands of sites and hundreds of thousands of artefacts, mainly spanning the two millennia from 1000 BCE to 1000 CE, have been georeferenced and systematically classified.

The resulting database offers an unparalleled opportunity to study the impact of the city of Rome on its hinterland during its ascent to power, imperial peak and its subsequent decline. No other major world metropolis offers such a wealth of long-term archaeological data capable of documenting the entire process of urbanization and de-urbanization across such an extended period.

In the next phase of the project, we have two main aims:

1. to use this data to develop new interpretations and narratives of the impact of Rome, and of cities more generally, on their surrounding territories, including infrastructure, production, trade, ecology and health;

2. to use our newly developed methods of data integration to link and combine with other archaeological projects to investigate and compare survey methodologies, long-term social and economic change in other regions of the Mediterranean, and to analyse landscape and urbanization over the longue durée at still larger scales. 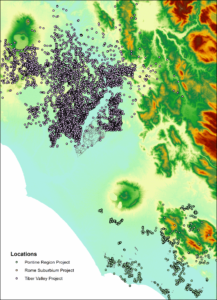